While hiking along the edge of a swamp in southern Illinois, I came across this very cool creature. This species is impressive in both size and pattern. The unique marbled pattern of colors on the abdomen, as well its orange head and black and white legs make for visually stunning arachnid. 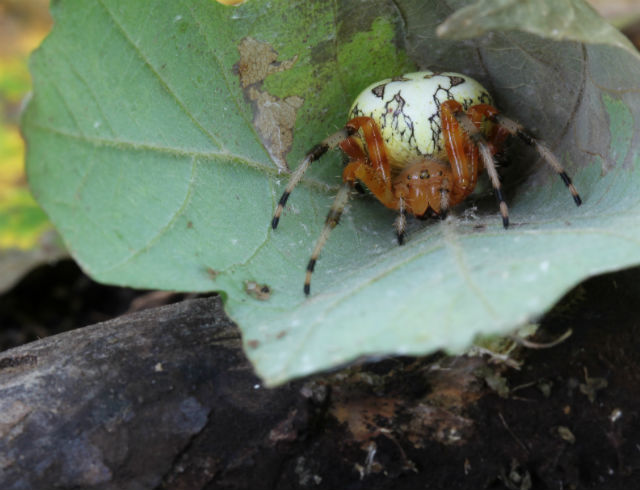 This spider tends to build its web in trees and shrubs in moist, wooded settings. Unlike most other orbweavers in its genus, it hides in a silken retreat near its web. The retreat is made of leaves folded over and held together with silk. One strand of silk extends all the way the retreat. If it vibrates, the spider knows it has caught something.

The “orbweaver” part of the name comes from its web, which the spider weaves to form a circular, or orb-like grid. The fragile web is easily damaged, so the spider spends time each day repairing it, regularly rebuilding it entirely.

The Marbled Orbweaver often falls to the ground if it senses it is in danger. It is sometimes also called the Pumpkin Spider because of its resemblance to orange pumpkin.

While visiting Snake Road in southern Illinois, I came across this “lifer” amphibian which I’ve never seen “in person” before. It reminded me of a smaller version of a Redback Salamander that is common in my area of Ohio. Its body color is dark grey with a red or orangish wavy pattern, or “zigzag,” extending from the neck down the back to the base of the tail where it straightens out.

This species is part of a large group known as Lungless Salamanders. They have no lungs and breathe through their skin and mouth. This unique trait requires them to keep the surface of their skin moist at all times. Females lay their eggs deep in underground cavities and guard their eggs until hatching. The baby salamanders do not go through an aquatic larval stage. Instead, when young salamanders emerge from their eggs they look like miniature versions of adults.

Zigzag Salamanders inhabit temperate forests, rocky areas and caves. They have a preference for moist, rocky slopes. There they hunt for spiders and beetles, which comprise most of their diet. This is one of the smallest salamanders in the United States, reaching only about three inches in total length. 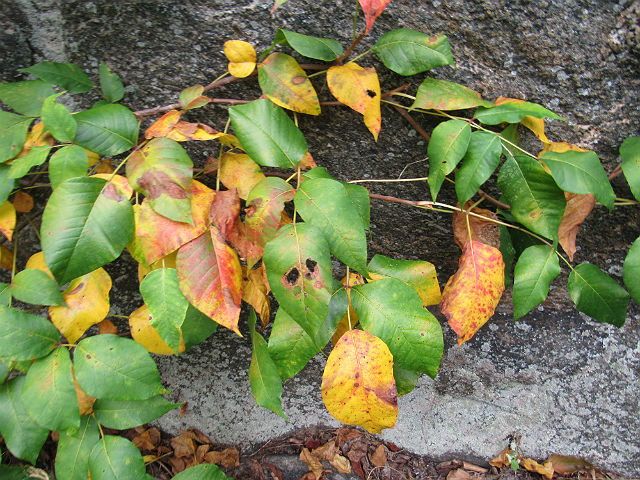 While visiting southern Illinois, I had several instances when I came across this plant, which belongs to the same family as mangoes and cashews. All three of these types produce urushiol, the compound that causes an itchy rash.

Every part of the Poison Ivy (leaves, stems and roots) is poisonous, so not only should it not be touched, it should not be burned. With burning, the urushiol becomes volatilized in the smoke and you can get it in your lungs, which is very dangerous and can even lead to death.

Scientists speculate urushiol evolved as an antimicrobial defense agent. Birds, deer, squirrels, reptiles and insects are not affected by it. In humans, contact with Poison Ivy causes a reaction known as a cell-mediated immune response. The rash it causes is a result of your immune system attacking its own skin cells.

“Leaves of three, let it be; berries white, take flight” is a familiar saying to help identify and avoid Poison Ivy, though its characteristics are very diverse and change in different habitats.

This plant often follows civilization, cropping up in disturbed sites like cut banks, roadsides and old fence rows. It prefers woodland borders and clearings and shuns the dense forest. Despite its common name, it is not a true ivy.

For those who are allergic to the plant, its benefits are often overlooked. Poison Ivy is an early colonizer, often taking hold in areas disturbed by humans and it begins the slow process of rebuilding the landscape. It requires very little nourishment or moisture and it attracts and sustains a variety of wildlife.

I often find this insect in the Autumn, not only when visiting southern Illinois, but also in my home state of Ohio.

This pale green species occurs over a wide distribution in the northern United States and parts of southern Canada. 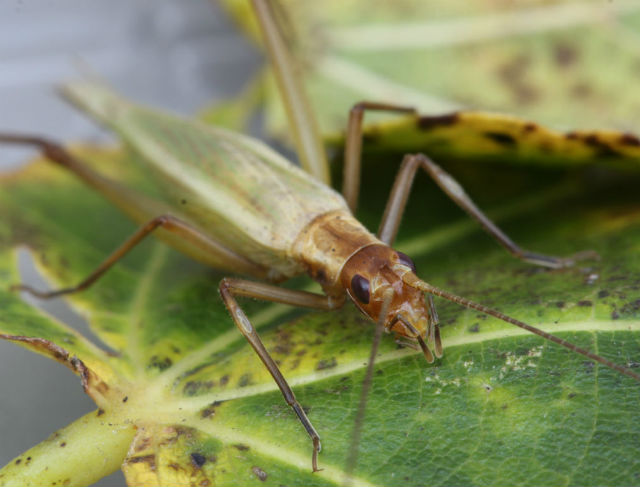 The Snowy Tree Cricket is known for having a chirping rate highly correlated with ambient temperature. This relationship is known as Dolbear’s Law and was published in 1897 in an article called “The Cricket as a Thermometer.”

As their name implies, these creatures live in trees and shrubs, for which they are well camouflaged. The bodies of tree crickets are long and skinny compared to the bodies of other types of familiar crickets.

Like other species of in their family, they feed on a wide range of items like plant parts, other insects and even fungi.

The call of the Snowy Tree Cricket is commonly used as a background sound in movies and on television in order to depict a warm Summer evening.

This is a neat, delicate-appearing invertebrate that I enjoy coming across, whether while doing yardwork or out herping.

While visiting a lake in southern Illinois, I noticed a pair of these water birds that I have occasionally seen in my home state of Ohio.

This is the most widespread grebe in the New World, and the most familiar in temperate parts of North America. Pied-billed grebes are small, stocky, and short-necked.

Although it swims like a duck, the Pied-billed Grebe does not have webbed feet. Instead, each toe has lobes extending out on the sides that provide extra surface area for paddling.

When disturbed or suspicious, it may sink slowly until only head is above water. This bird is rarely seen in flight. It prefers to escape predators by diving and it migrates at night.